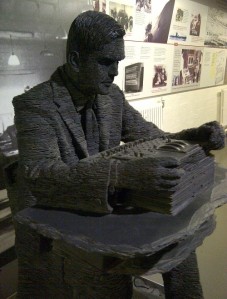 “Computer pioneer and codebreaker Alan Turing has been given a posthumous royal pardon. It addresses his 1952 conviction for homosexuality for which he was punished by being chemically castrated. The conviction meant he lost his security clearance and had to stop the code-cracking work that had proved vital to the Allies in World War Two. The pardon was granted under the Royal Prerogative of Mercy after a request by Justice Minister Chris Grayling.” Read more at http://www.bbc.co.uk/news/technology-25495315

Enigmedia Marketing continues to be in awe of the Bletchley Park codebreakers and of the incredible work carried out by Alan Turing and his team during the Second World War. Although it’s been a very long wait, we at last welcome the news of Turing’s pardon, after years of petitioning by hardworking campaigners and supporters of his life and work.

Find out more about Alan Turing and Bletchley Park at http://www.bletchleypark.org.uk/

You can also read our 2013 blog about our visit  to Bletchley Park at https://enigmediamarketing.com/2013/09/24/inspiration-innovation-at-bletchley-park/

This site uses Akismet to reduce spam. Learn how your comment data is processed.