Jenny Sadler is a remarkable music teacher with an impressive CV. Not only is she an accomplished vocalist and musician with over 40 years’ experience in the music industry, she’s been passing on her skills from a young age. In March 2015, Jenny is celebrating 20 years of her unique music and vocal academy which boasts a rapidly growing list of students; superior exam pass rates and regular encounters with popular TV shows The Voice, X Factor and Britain’s Got Talent.

A former Bowthorpe High School student, Jenny’s passion and talent for music came to the fore at the tender age of 11. Already an accomplished pianist, in 1973 she met new Norwich music shop owner, Jack White. Jenny picks up the story: “I remember that the first day Jack White’s Music Shop opened for business, my dad said to me ‘come on Jen, there’s a new music shop opening today – let’s go and have a look’. When we arrived, my Dad told Mr White my name; promptly sat me at the piano in the shop window and I began to play. After a short while, an audience started to gather – and that’s when Mr White said to me ‘great – you start work next Saturday’!”

As a Saturday girl at Jack White’s Music Shop on St Benedict’s Street, Jenny’s natural enthusiasm and warm personality began to shine. By the time she was 16, she had passed her Grade 8 piano examination and at 18, began tutoring students in piano and music theory full-time. It wasn’t long before Jenny turned her attention to performing and in 1980, formed a band called “Step by Step” who enjoyed touring success in the UK, Tenerife and the Balearic Islands. The band also supported renowned artists throughout the 1980s including Cilla Black and Marty Wilde as well as top of the bill variety acts Little & Large, Cannon & Ball and Ken Dodd.

Returning to Norwich to pursue her dream of teaching music, Jenny enrolled with the Southern Music College in Essex and became a qualified teacher in 1988. Already a Yamaha Music School approved tutor, she was able to set up her own teaching studio located in Jack White’s Music Shop. Quickly attracting a growing list of students, it wasn’t long before Jenny had to employ support staff of her own. 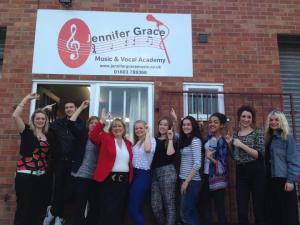 In 1995 and with a team of 12 teachers, Jenny created her very own singing school “Ring n Sing” which in 2012 evolved into JGM Vocal Academy, now based at a tailor-made unit in Hellesdon, Norwich.

With her passion for learning still as strong as ever, Jenny went on to study and achieve singing diplomas with the Victoria Music College in London and in 2004 received a Fellowship with honours – their highest accolade.

Between 2008 and 2011, Jenny also found time to teach at Breckland Park School in Swaffham, delivering lessons and arranging performances before rising to the role of Head of Music. Now in 2015 and one year on from moving to her own premises, Jenny is busier than ever. Never one to boast about her own achievements, she has a genuine passion for music and continues to dedicate her time to each and every student, regardless of their skills, knowledge and background.

For more information about JGM Academy, please visit their website.

This site uses Akismet to reduce spam. Learn how your comment data is processed.